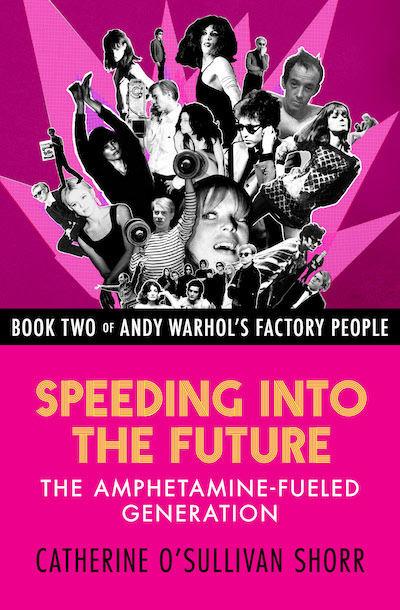 Speeding into the Future

Published by Open Road Media
The 2nd volume of an intimate oral history, Speeding into the Future vividly recounts how Andy Warhol and his superstars revolutionized both the art world and the nature of celebrity in the mid-1960s

Spanning from 1965 through 1966, 2 years that could be considered the pinnacle of Andy Warhol’s creative output, Speeding into the Future features firsthand accounts of life inside the Silver Factory. Powered by a steady supply of amphetamines, Quaaludes, and other drugs, the artists and misfits of the Factory crowd generated Warhol’s controversial films and art while their own star-quotients rose and declined—and as they fell in and out of love with one another.

During this period, Warhol created the notion of the “It Girl” by declaring debutante Edie Sedgwick the 1965 “Girl of the Year” and predicting her skyrocketing yet short-lived fame; he introduced German-born singer Nico to Lou Reed and John Cale of the Velvet Underground, hosting their rehearsals at the Factory; and codirected, with Paul Morrissey, his most commercially successful film, Chelsea Girls, featuring Nico, Brigid Berlin, Ondine, and other superstars. Speeding into the Future includes revelatory images snapped by Billy Name and other photographers as Bob Dylan visited the Factory, and goes behind the scenes of Warhol’s films of Ondine, Ultra Violet, Taylor Mead, and Viva. In this powerful chronicle, Catherine O’Sullivan Shorr captures the events of these dizzying, outrageous years through the words of those who lived through them.