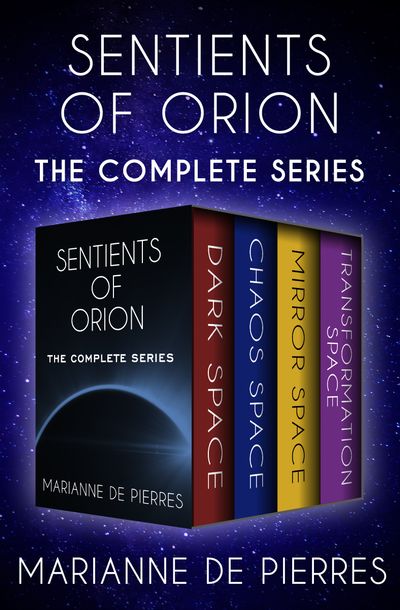 Dark Space: The arid mining planet of Araldis has been invaded. As her people struggle against the onslaught, Baronessa Mira Fedor falls prey to the intrigues of the planet’s elite, forcing her on the run. To survive, Mira must uncover the identity of the single guiding intelligence responsible for both the war and her betrayal.

Chaos Space: Mira Fedor has fled war-torn Araldis. Her only hope to save her world lies with the Orion League of Sentient Species, which will not involve itself in an intergalactic conflict. Pursued by her planet’s invaders and her own people, Mira finds herself targeted by the League’s agents. She knows a single entity is responsible for the havoc wreaked on her life, but its motives remain a mystery.

Mirror Space: With her home planet of Araldis under hostile occupation, and the Orion League unable—or unwilling—to help, Mira Fedor recruits mercenary captain Rast Randall to save her home. Now, she is free to unearth the hidden strategies of her allies and enemies alike, and continue her quest to solve the mystery of the omniscient Sole Entity with a dark agenda.

Transformation Space: Mira Fedor is pregnant, and her rapid gestation indicates her child may be more than human. As secrets are revealed and conspiracies exposed about the attack on Araldis, Mira wonders if this cosmic game where so many people have been used as pawns is truly coming to an end—and if the Sole Entity has a final move to make.