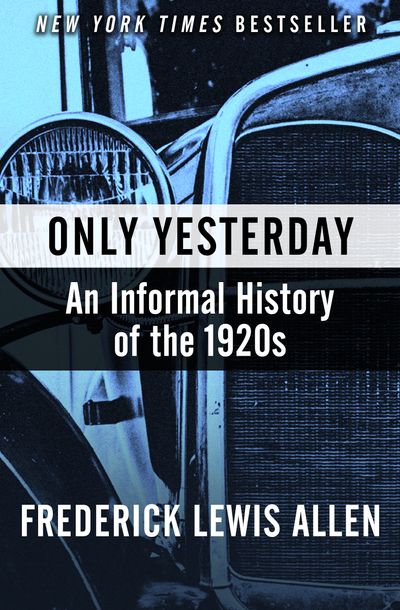 Published by Open Road Media
A history of roaring prosperity—and economic cataclysm: “The one account of America in the 1920s against which all others must be measured” (The Washington Post).

Beginning November 11, 1918, when President Woodrow Wilson declared the end of World War I in a letter to the American public, and continuing through his defeat, Prohibition, the Big Red Scare, the rise of women’s hemlines, and the stock market crash of 1929, Only Yesterday, published just two years after the crash, chronicles a decade like no other. Allen, who witnessed firsthand the events he describes, immerses you in the era of flappers, speakeasies, and early radio, making you feel like part of history as it unfolds.

This bestselling, enduring account brings to life towering historical figures including J. Pierpont Morgan, Henry Ford, Sigmund Freud, Albert Einstein, Al Capone, Babe Ruth, and Jack Dempsey. Allen provides insightful, in-depth analyses of President Warren G. Harding’s oil scandal, the growth of the auto industry, the decline of the family farm, and the long bull market of the late twenties. Peppering his narrative with actual stock quotes and breaking financial news, Allen tracks the major economic trends of the decade and explores the underlying causes of the crash. From the trial of Nicola Sacco and Bartolomeo Vanzetti to the inventions, crazes, and revolutions of the day, this timeless work will continue to be savored for generations to come.