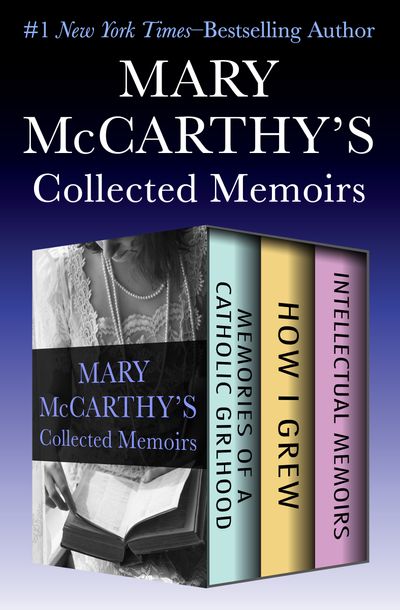 Published by Open Road Media
Three candid, affecting memoirs by the #1 New York Times–bestselling author of The Group, including a National Book Award finalist.
In Memories of a Catholic Girlhood, Mary McCarthy begins with her recollections of a happy childhood cut tragically short by the death of her parents during the influenza epidemic of 1918. Tempering memory with invention, McCarthy describes how, orphaned at six, she spent much of her childhood shuttled between two sets of grandparents and three religions—Catholic, Protestant, and Jewish. Early on, McCarthy lets the reader in on her secret: The chapter you just read may not be wholly reliable—facts have been distilled through the hazy lens of time and distance.
How I Grew is McCarthy’s intensely personal autobiography of her life from age thirteen to twenty-one. With detail driven by an almost astonishing memory recall, the author gives us a masterful account of these formative years. From her wild adolescence—including losing her virginity at fourteen—through her eventual escape to Vassar, the bestselling novelist, essayist, and critic chronicles her relationships with family, friends, lovers, and the teachers who would influence her writing career.
And Intellectual Memoirs opens with McCarthy as a married twenty-four-year-old Communist and critic. She’s disciplined, dedicated, and sexually experimental: At one point she realizes that in twenty-four hours she “had slept with three different men.” Over the course of three years, she will have had two husbands, the second being the esteemed, much older critic Edmund Wilson. It is Wilson who becomes McCarthy’s mentor and muse, urging her to try her hand at fiction. Intellectual Memoirs is a vivid snapshot of a distinctive place and time—New York in the late 1930s—and the forces that shaped Mary McCarthy’s life as a woman and a writer.