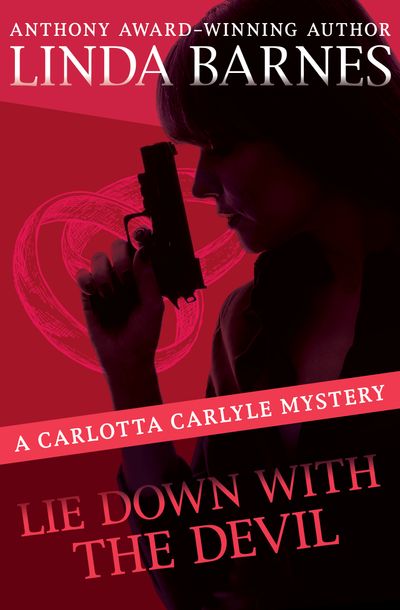 Lie Down with the Devil

On the outs with her secretive mob boss lover, Sam Gianelli, Carlotta occupies herself with a seemingly routine case. She feels an immediate bond with her new client, Jessie Franklin. Right now, both women are dealing with issues of trust. For Jessie, it’s the man she’s soon to marry. Tipped off that he’s cheating on her, she wants Carlotta to tail him. No sooner does Carlotta get a track on the likely cad, than Jessie is killed by a hit-and-run driver.

But when the accident is ruled a homicide, Carlotta discovers that Jessie has being lying about everything—including her name and her fiancé. But it’s the reason for roping Carlotta into the deception that has the sleuth on edge. Because Carlotta’s the number one suspect in the murder. Now she must investigate her own past—and Gianelli’s—to save her neck.

Only one thing is certain: “The course of mobbed-up love never runs smooth [in this] startling new chapter in the heroine’s checkered personal life” (Kirkus Reviews).

Lie Down with the Devil is the 12th book in the Carlotta Carlyle Mysteries, but you may enjoy reading the series in any order.