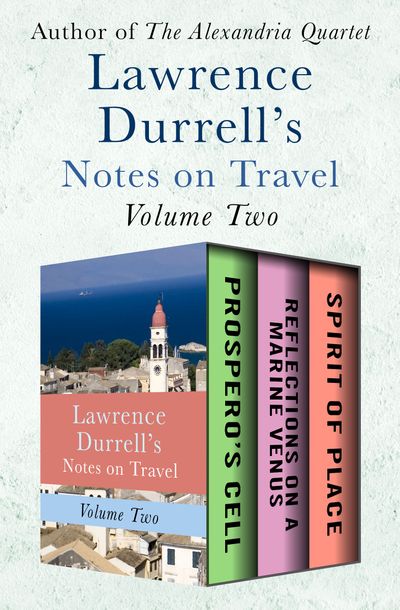 Published by Open Road Media
Travel memoirs “as luminous as the Mediterranean air” from the acclaimed author of the Alexandria Quartet, who is featured in The Durrells in Corfu (Time).

Born in India, acclaimed British novelist and poet Lawrence Durrell lived in Corfu as a young man, enjoying salt air, cobalt water, and an unfettered bohemian lifestyle, along with his brother, Gerald, who would also go on to be a writer and a naturalist. Their real-life family is portrayed in the PBS Masterpiece production, The Durrells in Corfu. Over the following decades, he rambled around the Mediterranean, making homes in Egypt, Cyprus, and Greece, always bringing his poet’s eye to document his experiences.

Prospero’s Cell: Along with his family, Lawrence Durrell spent four youthful years on Corfu, an island jewel with beauty to match its fascinating history. While his brother, Gerald, was collecting animals as a budding naturalist, Lawrence fished, drank, and lived with the natives in the years leading up to World War II, sheltered from the tumult that was engulfing Europe—until finally he could ignore the world no longer. Durrell left for Alexandria, to serve his country as a wartime diplomat, but never forgot the wonders of Corfu, captured so beautifully in this “brilliant” memoir (The Economist).

“In its gem-like miniature quality, [Prospero’s Cell] is among the best books ever written.” —The New York Times

Reflections on a Marine Venus: After four tortuous wartime years in Egypt, Durrell finds a post on the island of Rhodes, where the British are attempting to return Greece to the sleepy peace it enjoyed in the 1930s. From a dip in the frigid Aegean Sea, which jolts him awake for what feels like the first time in years, Durrell breathes in the joys of island life, meeting villagers, eating exotic food, and throwing back endless bottles of ouzo.

Spirit of Place: In these letters and essays, Durrell exhibits the power of poetic observation that continues to make his travel writing so vivid and fresh. He traveled not to sightsee but to live, and made homes in the Mediterranean, Egypt, France, Yugoslavia, and Argentina. Each time he landed, he rooted himself deep into the native soil, taking in not just the sights and sounds of his new land, but the essential character of the country, which he brings to life in these pages.

“The letters depict the brio of Durrell’s existence with intoxicating vividness.” —The New York Times