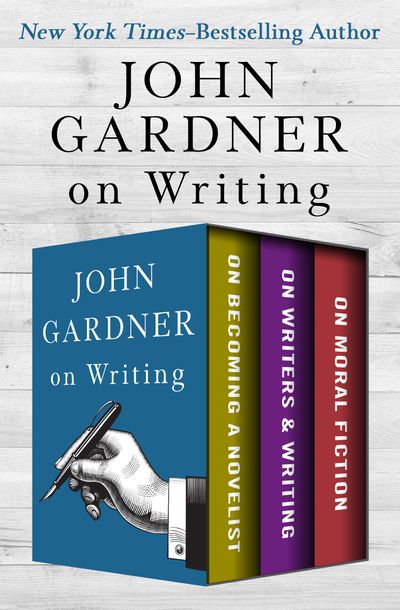 Published by Open Road Media
Three books in one volume: Advice and reflections on modern fiction from “one of the greatest creative writing teachers we’ve ever had” (Frederick Busch).

In On Becoming a Novelist, John Gardner advises the aspiring fiction author on such topics as the value of creative writing workshops, the developmental stages of literary growth, and the inevitable experience of writer’s block. Drawn from his two decades of experience in creative writing, Gardner balances his compassion for his students with his knowledge of the publishing industry, and truthfully relates his experiences of the hardships that lie ahead for aspiring authors.
In On Writers & Writing, acclaimed novelist John Gardner discusses the craft of fiction writing, taking to task some of his best-known contemporaries in the process. Gardner criticizes some for writing disingenuous fiction, and commends others who produce literature that acts as a life-affirming force. He offers insights into and exacting critiques on such writers as Vladimir Nabokov, John Updike, Saul Bellow, and John Cheever, while addressing his personal influences and delivering broad-ranging observations on literary culture.
And in On Moral Fiction, John Gardner’s thesis is simple: “True art is by its nature moral.” Since the book’s first publication, the passion behind Gardner’s assertion has both provoked and inspired readers. In examining the work of his peers, Gardner analyzes what has gone wrong, in his view, in modern art and literature, and how shortcomings in artistic criticism have contributed to the problem. He develops his argument by showing how artists and critics can reintroduce morality and substance to their work to improve society and cultivate our morality.