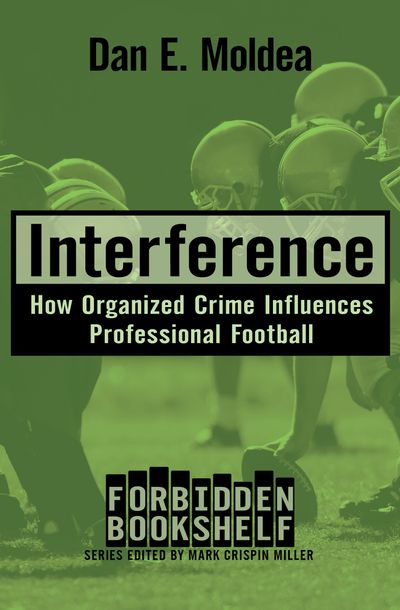 Published by Open Road Media
A shocking exposé of widespread corruption and mob influence throughout the National Football League—on the field, in the owners’ boxes, and in the corporate suites

According to investigative journalist Dan E. Moldea, for decades the National Football League has had a strong and unspoken understanding with a dangerous institution: organized crime. In his classic exposé, Interference, Moldea bares the dark, sordid underbelly of America’s favorite professional team sport, revealing a nest of corruption that the league has largely ignored since its inception.

Based on intensive research and in-depth interviews with coaches, players, mobsters, bookies, gamblers, referees, and league officials—including some of the sport’s all-time greats—the author’s shocking allegations suggest that the betting line is firmly in the hands of the mob, who occasionally manipulate the on-field action for maximum profit. Interference chronicles a long-standing history of gambling, drugs, and extortion, of point-shaving and game-fixing, and reveals the eye-opening truth about numerous gridiron contests where the final results were determined even before the kickoff. Moldea exposes the mob connections of many of the team owners and their startling complicity in illegal gambling operations, while showing how NFL internal security has managed to quash nearly every investigation into illegality and corruption within the professional football world before it could get off the ground. Provocative, disturbing, and controversial, Interference is a must-read for football fans and detractors alike, offering indisputable proof that what’s really happening on the field, in the locker room, and behind the scenes is a whole different ball game.