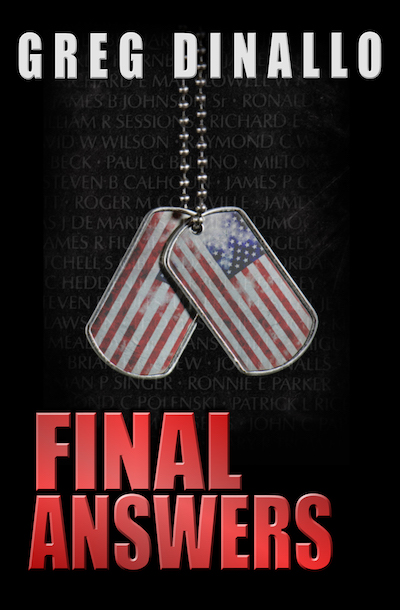 Published by Open Road Media
Greg Dinallo, the heralded author of Rockets’ Red Glare and Purpose of Evasion, has written his most chilling and disturbing thriller yet: A novel of intrigue that explores the emotionally charged issue of Vietnam War MIAs. Final Answers is provocative, authentic, and powerful fiction

Among the 58,176 names etched on the long black wall of the Vietnam Memorial in Washington, DC, are names of those who never came home—of MIAs whose families are still waiting for final answers.

During a business trip to Washington, a veteran, now a statistics expert, has an experience at the Memorial that will shatter his carefully constructed life with the impact of a Claymore mine. Touching the names carved in the wall, he finds one all too familiar: his own. A. Calvert Morgan understands cold, hard numbers. But how did his name get on the wall? Morgan’s wife, Nancy, does some research for him that leads him to Kate Ackerman. Kate’s husband had been listed as missing in action after being shot down in Laos twenty years earlier; during those years, she has joined the National League of Families and become a dedicated MIA activist.

At first, Morgan believes that he is part of a bizarre military snafu—a data entry error made in the field. But when Kate guides him to the Army’s Central Identification Lab in Hawaii, he begins to realize that his “death” was not an accident. In the war zone, another man took his name and serial number for his own —and then was killed. Morgan finds out that his impersonator was no ordinary GI He was, in fact, a key player in a macabre conspiracy that reaches back to the poppy fields of Laos.

Morgan has set off a deadly alarm; the drug lord is still operating and has targeted him for elimination. Coming after Morgan—a man more comfortable with a computer than a handgun—the hit man commits a murder so brutal that Morgan’s life is turned into a raging fight for survival.

From the San Francisco mortuary that received the bodies of American servicemen during the war to Southeast Asia in the ’90s, Morgan is venturing into ever more violent territory. And he is not alone. Kate Ackerman has joined him on a trip to Thailand—hopeful that her husband is still alive, his fate possibly linked to those who have targeted Morgan for death.

Amid Bangkok’s steamy nightclubs and brackish, twisting canals, their quest pushes them into the jungle, across the Mekong River into Laos, where they move toward a brutal final answer to the mystery of Vietnam MIAs . . .