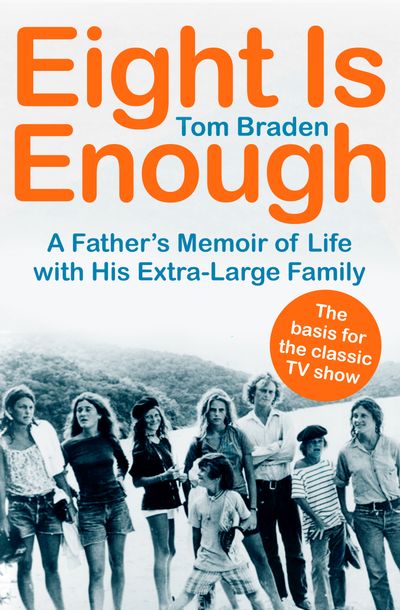 Tom Braden had a colorful career: He parachuted into Nazi-occupied France, directed the CIA’s covert operations program during the early years of the Cold War, ran for public office, owned a newspaper, served as executive secretary for the Museum of Modern Art, and cohosted the CNN show Crossfire. He counted among his friends David Brinkley, Robert Frost, Kirk Douglas, and Nelson Rockefeller. But Braden considered fatherhood both his most important job and his biggest adventure. No wonder; he and his wife, Joan, a State Department official and Washington society hostess, raised eight children during one of the most tumultuous periods in American history.

In this diverting family memoir, Braden shares a treasure trove of amusing anecdotes—from the time his youngest daughter’s pet sheep interrupted a dinner party with a Supreme Court justice to the telegram US Attorney General Robert F. Kennedy sent after the birth of the Bradens’ eighth child: “Congratulations. I surrender.” (The Kennedys had seven children at the time). With wit and wisdom, Braden also addresses some of the most serious issues, including drugs, alcohol, and premarital sex, faced by parents in an era of deep distrust between generations.

When ABC proposed adapting Eight Is Enough for television, Braden found the idea so preposterous he sold the rights for one dollar. The award-winning series starring Dick Van Patten and Betty Buckley ran for five seasons and launched the Hollywood careers of many young actors, including Willie Aames and Ralph Macchio. A celebration of the joys and tribulations of fatherhood, Eight Is Enough speaks with warmth, humor, and compassion to parents and children everywhere.