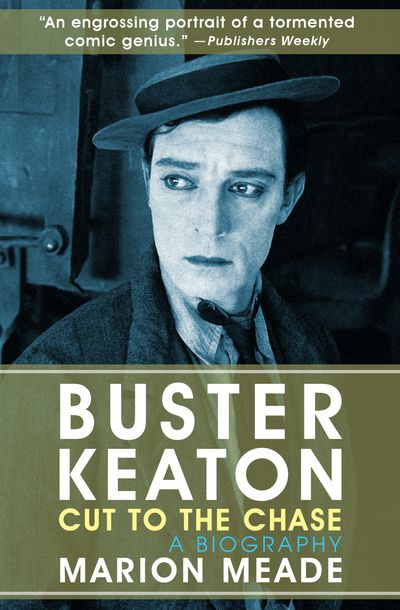 Buster Keaton: Cut to the Chase

Published by Open Road Media
An American icon, Joseph Frank “Buster” Keaton is easily acknowledged as one of the greatest filmmakers in early cinema and beyond. His elaborate slapstick made audiences scream with laughter. But, his stone face hid an internal turmoil. In BUSTER KEATON: CUT TO THE CHASE, biographer Marion Meade seamlessly lays out the life and works of this comedy genius who lacked any formal education.

“Buster” made his name as a child of vaudeville, thrown around the stage by his father in a cartoon pantomime of very real abuse. The lessons he carried forward from that experience translated into some of the greatest silent films of all time. Keaton wrote, directed, performed, and edited dozens of features and shorts, including his masterpiece, The General. However, those early scars also led to decades of drinking and mistreatment of women. Keaton saw huge successes, Hollywood sex scandals, years of neglect from studios and audiences, and finally a shaky resurrection that assured his place in Hollywood’s film canon.

Meticulously researched, this book brings together four years of research and hundreds of interviews to paint a nuanced portrait of a compelling artist. No comedy fan or film buff should miss this insider story of the man behind the stone face.