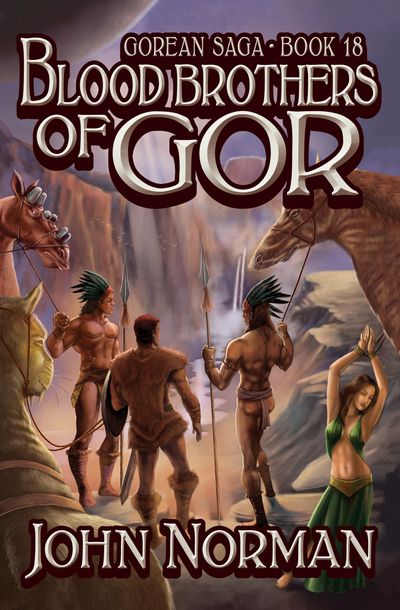 Published by Open Road Media
On the run from a death squad, General Half-Ear lures his pursuers into the land of the Red Savages on the planet of Gor.

Half-Ear, or Zarendargar, a Kur general fallen from favor in the Steel Worlds, now sought by a death squad of his savage compeers, has determined to lure his pursuers into the Barrens, the vast prairies to the east of known Gor, populated by warring tribes known to Goreans as the Red Savages. He has arranged matters in such a way that he will be abetted in his stand against the death squad and its human allies by a human ally of his own—his former foe, Tarl Cabot. The ancestors of the Red Savages, like those of many other Goreans, were brought to Gor long ago in Voyages of Acquisition by the Priest-Kings. The Red Savages were settled in an area not unlike that of their former home, a sweeping, almost endless grassland, where they tend to continue their former ways of life—and war.

Blood Brothers of Gor is the 18th book in the Gorean Saga, but you may enjoy reading the series in any order.