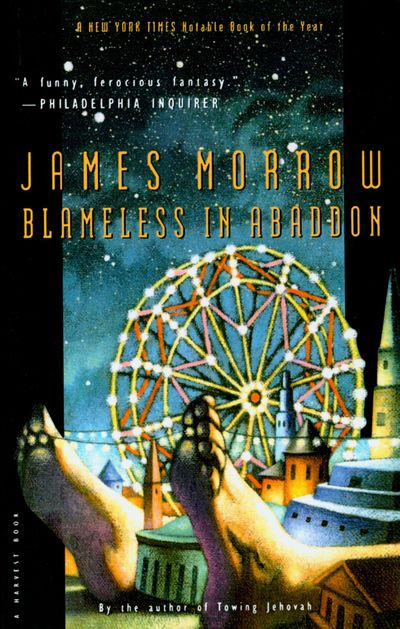 Published by Houghton Mifflin Harcourt
A New York Times Notable Book: The People vs. God in “a funny, ferocious fantasy” from the two-time Nebula Award–winning author (The Philadelphia Inquirer).

Hallelujah! God is not dead. He’s just been a deep-freeze coma in the Arctic. Strapped for cash, the Vatican has sold the body (a bargain at $1.3 billion!) to Baptists in Florida. Enterprising souls that they are, they’ve turned the Corpus Dei into a popular, two-mile long theme-park attraction at Orlando’s Celestial City USA—hooked up to the largest life-support system on earth. Then things get weird.

Martin Candle, a justice of the peace who’s suffered a series of devastating setbacks, decides to put Him on trial in The Hague for crimes against humanity. Now, to accumulate evidence for the prosecution, Candle enters God’s brain on a steamer to find out what in the world the Almighty could possibly have been thinking all these years.

What ensues in this sequel to James Morrow’s World Fantasy Award–winning Towing Jehovah is a “square off for the greatest moral debate of all time . . . [and it’s] not to be missed” (Booklist).

“A wildly imaginative novel . . . as barbed with high and low comedy as an Aristophanes play—and just as fundamentally serious.” —The Bloomsbury Review

“Hilarious . . . [Morrow] demonstrates a sharp mind, [and] a sharper tongue . . . Salman Rushdie, eat your heart out.” —The San Diego Union-Tribune