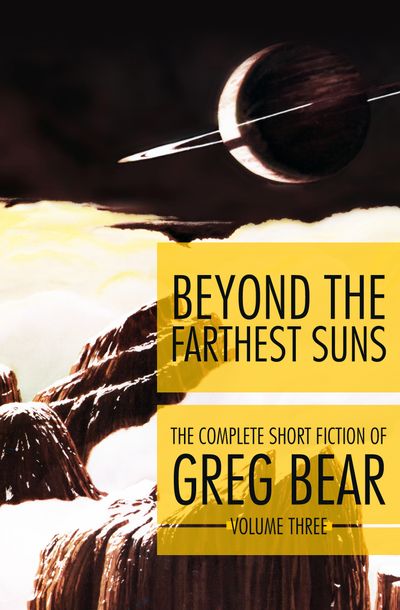 Beyond the Farthest Suns

Published by Open Road Media
7 remarkable stories, newly revised for this collection, showcase the award-winning talents of one of the 21st century’s finest writers of speculative fiction

Whether penning science fiction (Moving Mars, Queen of Angels, War Dogs), alternate history (the Mongoliad series with Neal Stephenson), or fantasy (Sleepside, The Infinity Concerto), Greg Bear tells stories that engage the reader’s intellect while gripping the imagination. His short fiction is no exception. Beyond the Farthest Suns takes readers to the far end of the universe and the borders of scientific understanding. The volume includes:

· “The Way of All Ghosts,” set in the bestselling universe of Eon and Eternity;
· “The Venging,” which takes a group of desperate fugitives fleeing alien dominance down into the awesome gateway of a black hole;
· “The Fall of the House of Escher,” in which a world-famous illusionist is brought back from the dead for a terrifying command performance;
· “Hardfought,” the critically acclaimed Nebula Award–winning story showcasing a far future in which a legendary female pilot and her alien captor are forced into a tapestry of echoing lives where they struggle to communicate and find the deepest secrets of their history.

These works, along with 3 additional entries, stunningly illustrate how Bear interweaves the rationality of science with remarkable characters whose thoughts and emotions reflect our own.