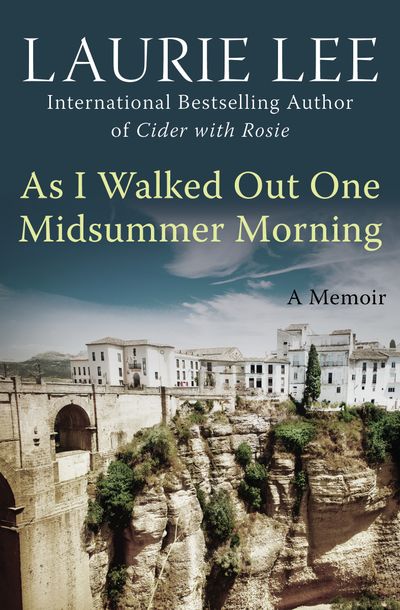 As I Walked Out One Midsummer Morning

Published by Open Road Media
The author of Cider with Rosie continues his bestselling autobiographical trilogy with “a wondrous adventure” through Spain on the eve of its civil war (Library Journal).

On a bright Sunday morning in June 1934, Laurie Lee left the village home so lovingly portrayed in his bestselling memoir, Cider with Rosie. His plan was to walk the hundred miles from Slad to London, with a detour of an extra hundred miles to see the sea for the first time. He was nineteen years old and brought with him only what he could carry on his back: a tent, a change of clothes, his violin, a tin of biscuits, and some cheese. He spent the first night in a ditch, wide awake and soaking wet.

From those unlikely beginnings, Laurie Lee fashioned not just the adventure of a lifetime, but one of the finest travel narratives of the twentieth century. As I Walked Out One Midsummer Morning, written more than thirty years after the events it describes, is an elegant and irresistibly charming portrait of life on the road—first in England, where the familiar landscapes and people somehow made Lee feel far from home, and then in Spain, whose utter foreignness afforded a new kind of comfort.

In that brief period of peace, a young man was free to go wherever he wanted to in Europe. Lee picked Spain because he knew enough Spanish to ask for a glass of water. What he did not know, and what would become clear only after a year spent tramping across the beautiful and rugged countryside—from the Galician port city of Vigo, over the Sierra de Guadarrama and into Madrid, and along the Costa del Sol—was that the Spanish Republic would soon need idealistic young men like Lee as badly as he needed it.