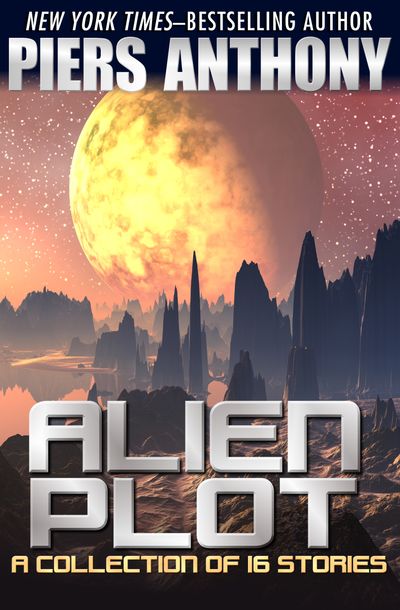 Published by Open Road Media
A collection of sixteen science fiction and fantasy short stories from the New York Times–bestselling author of the Xanth series.

Here for the pleasure of his millions of fans is a collection of short fiction by bestselling writer Piers Anthony. This collection of sixteen stories includes four that have been published only overseas or in small magazines. Each story is introduced by Piers Anthony. “Alien Plot,” the title story, is a brand-new long story that tells of an alien plot of ground that becomes home to a man from our world; “Nonent” is about another kind of alien plot, this one a plot to conquer Earth. “20 Years,” another brand-new story, is a fable of life and death in the future.

Other stories included are “December Dates;” “Ship of Mustard,” a spicy SF adventure tale; “Imp to Nymph,” which was originally published in the World Fantasy Convention program book in 1987; “E Van S,” a story that reveals the truth about who, or what, controls television programming; “Vignettes,” three short-shorts written for a fan publication; “Hearts,” a lovely story written for the Christmas edition of Books and Bookmen, a British magazine; “Revise and Invent,” a very funny satire on the business of being a writer; and “Love 40,” also published only in Britain, which gives new meaning to a traditional tennis term.