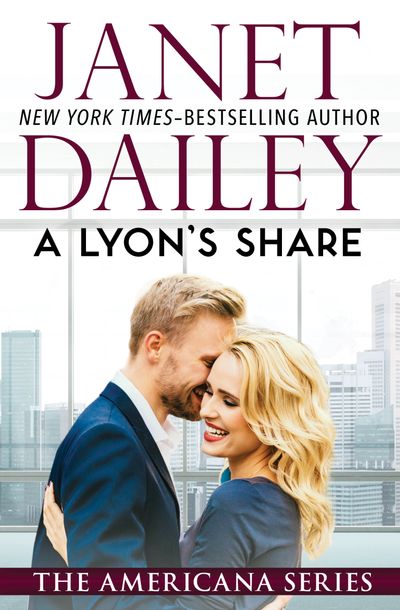 Published by Open Road Media
In the New York Times–bestselling author’s Americana series, a secretary and her boss cozy up while stuck in a Chicago blizzard—“Dailey remains the best!” (Affaire de Coeur).

Discover romance across America with Janet Dailey’s classic series featuring a love story set in each of the fifty states. With A Lyon’s Share, the New York Times–bestselling legend—with more than 300 million copies of her novels sold—brings us to Illinois, where passion comes alive in a bustling Midwestern metropolis.

At Lyon Construction in Chicago, young secretary Joan Somers has always had an unbusinesslike attraction to her handsome boss, Brandt Lyon. But the dynamic entrepreneur has been too busy to notice, and can sometimes seem colder than the winter wind off Lake Michigan.

Joan even considers quitting to spare herself the heartache—until fate intervenes with a pre-Christmas snowstorm that closes off streets and shuts the Windy City down. Stranded together in the office overnight, Joan suddenly has Brandt’s full attention . . . and the two must find a way to keep warm. But once the line between employer and employee is crossed, there’s no turning back.