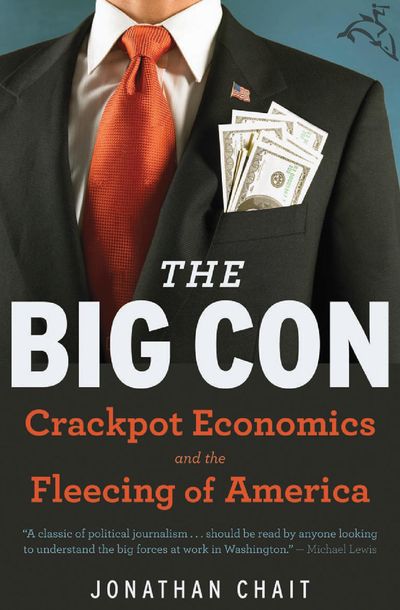 Published by Houghton Mifflin Harcourt
The scam of supply-side economics is clearly and convincingly explained in “a classic of political journalism” (Michael Lewis).

Jonathan Chait has written for a range of publications, from the Wall Street Journal to the Washington Post, and considers himself a moderate. But he’s convinced that American politics has been hijacked.

Over the past three decades, a fringe group of economic hucksters has corrupted and perverted our nation’s policies, Chait argues, revealing in The Big Con how these canny zealots first took over the Republican Party, and then gamed the political system and the media so that once-unthinkable policies—without a shred of academic, expert, or even popular support—now drive the political agenda, regardless of which party is in power. The principle is supposedly “small government”—but as he demonstrates, the government is no smaller than it was in the days of Ronald Reagan; it’s simply more debt-ridden and beholden to wealthy elites.

Why have these ideas succeeded in Washington even as the majority of the country recognizes them for the nonsense they are? How did a clique of extremists gain control of American economic policy and sell short the country’s future? And why do their outlandish ideas still determine policy despite repeated electoral setbacks? Explaining just how things work in Washington, DC, and distinguishing between short-term volatility in the “political weather” and the long-term, radical shift in the “political climate,” Chait presents a riveting drama of greed and deceit that should be read by every concerned citizen.

“Chait is both very serious and seriously funny as he traces the rise of conservatism over the past thirty years.” —Michael Kinsley