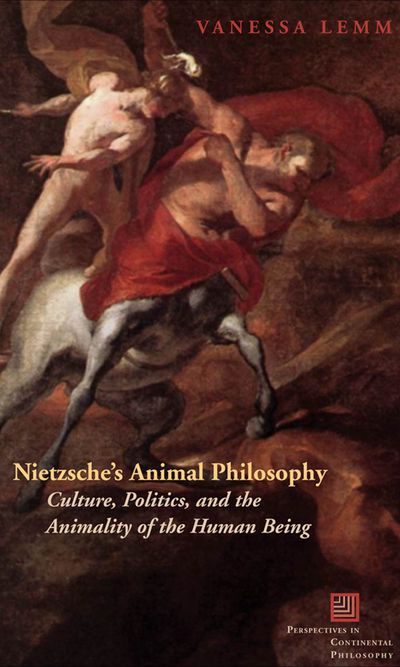 Published by Fordham University Press
“[Lemm] consolidates her reputation as one of Nietzsche’s most original, attentive, and lively readers.” —The Journal of Nietzsche Studies

This book explores the significance of human animality in the philosophy of Friedrich Nietzsche, and provides the first systematic treatment of the animal theme in Nietzsche’s body of work. Vanessa Lemm argues that the animal is neither a random theme nor a metaphorical device in Nietzsche’s thought. Instead, it stands at the center of his renewal of the practice and meaning of philosophy itself. Lemm provides an original contribution to ongoing debates on the essence of humanism and its future.

At the center of this new interpretation stands Nietzsche’s thesis that animal life and its potential for truth, history, and morality depends on a continuous antagonism between forgetfulness (animality) and memory (humanity). This relationship accounts for the emergence of humanity out of animality as a function of the antagonism between civilization and culture.

By taking the antagonism of culture and civilization to be fundamental for Nietzsche’s conception of humanity and its becoming, Lemm gives a new entry point into the political significance of Nietzsche’s thought. The opposition between civilization and culture allows for the possibility that politics is more than a set of civilizational techniques that seek to manipulate, dominate, and exclude the animality of the human animal. By seeing the deep-seated connections of politics with culture, Nietzsche orients politics beyond the domination over life and, instead, offers the animality of the human being a positive, creative role in the organization of life.