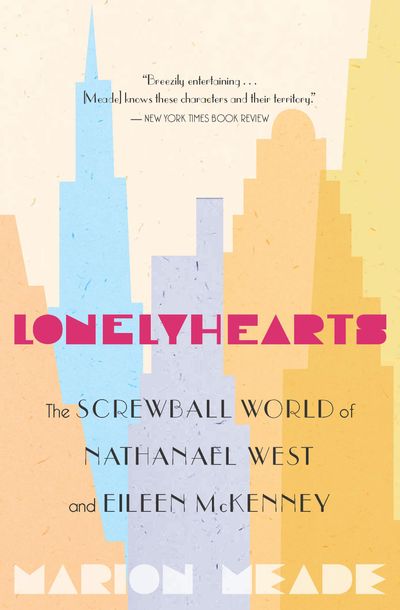 Published by Houghton Mifflin Harcourt
A “breezily entertaining” look at the comic couple who hobnobbed with Dorothy Parker, S. J. Perelman, Bennett Cerf, and other luminaries of their day (The New York Times Book Review).

Nathanael West—author, screenwriter, playwright—was famous for two masterpieces: Miss Lonelyhearts and The Day of the Locust, which remains one the most penetrating novels ever written about Hollywood. He was also one of the most gifted and original writers of his generation, a scathing satirist whose insight into the brutalities of modern life proved prophetic.

Eileen McKenney—accidental muse, literary heroine—grew up corn-fed in the Midwest and moved to Manhattan’s Greenwich Village when she was twenty-one. The inspiration for her sister Ruth’s stories in the New Yorker under the banner of “My Sister Eileen,” she became an overnight celebrity, and her star eventually crossed with that of the man she would impulsively marry.

Together, Nathanael and Eileen had entrée into a social circle that included F. Scott Fitzgerald, Dashiell Hammett, Katharine White, and many of the literary, theatrical, and film luminaries of the era. But their carefree, offbeat Broadway-to-Hollywood love story would flame out almost as soon as it began. Now, with “a great marriage of scholarship and gossip” (Minneapolis Star-Tribune), this biography restores West and McKenney to their rightful place in the popular imagination, offering “a shrewd portrait of two people who in their different ways were noteworthy participants in American culture during one of its liveliest periods” (Los Angeles Times).

“Opens a window onto the lives of writers in 1930s America as they struggled with anxieties, pretensions, temptations and myths that confound our culture to this day.” —Salon.com