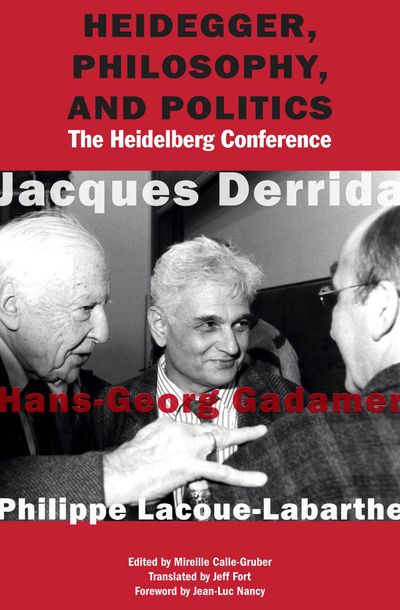 Published by Fordham University Press
Three renowned philosophers discuss the work of Martin Heidegger, and the moral quandary of engaging with a major philosopher who was also a Nazi.

In February 1988, philosophers Jacques Derrida, Hans-Georg Gadamer, and Philippe Lacoue-Labarthe came together in Heidelberg before a large audience to discuss the philosophical and political implications of Martin Heidegger’s thought. Heidegger’s involvement in Nazism has always been an unsettling stain on his legacy. But what is its real relation to his work in phenomenology or hermeneutics? What are the responsibilities of those who read, analyze, and elaborate this thought? And what is at stake should this important but compromised philosopher be completely dismissed?

The reflections presented by three of the most prominent of Heidegger’s readers, spoken in French and transcribed here, were an attempt to approach these questions before a broad public while maintaining a nuanced view of the questions at issue. Ranging over two days and including exchanges with one another and with the audience, the discussions pursued by these major thinkers remain highly relevant today.

Also included are a forward by Jean-Luc Nancy and a preface by Reiner Wiehl.