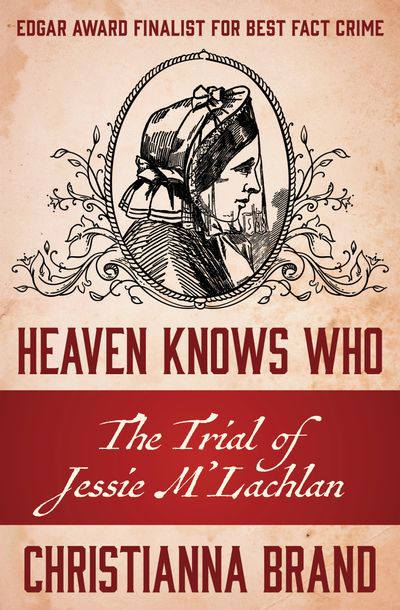 Published by MysteriousPress.com/Open Road
The chilling true account of the Sandyford murder case and the sensational nineteenth-century trial that forever changed how homicides are investigated.

Jessie M’Lachlan was one of the countless thousands who lived in the tenements of Glasgow, Scotland. In poor health ever since her pregnancy, the single mother worked herself to the bone to provide for her child, but there was never enough to make ends meet. Her only solace in the brutal port town was the company of her best friend, tough and brawny Jess M’Pherson. Jessie and Jess had forged a bond in hardship, but it would be be torn apart by murder.

In the summer of 1862, Jess M’Pherson was found stabbed to death in her bedroom, stripped to the waist and lying in a pool of her own blood. The killing sent Glasgow into an uproar. And when Jess’s coat was found in Jessie M’Lachlan’s home, the victim’s closest friend was charged with murder. In one of the most sensational trials in Scottish history—the first to make use of forensic photography—Jessie’s life was picked apart. Though her lawyers argued that she was nowhere near the scene of the crime, the jury deliberated for just fifteen minutes before sentencing her to hang. It may have seemed like the end, but Jessie’s story was just beginning.

One of the greatest mystery authors of her generation, Christianna Brand was also a pioneer of true crime. And despite reading like fiction, every word of this gripping historical saga is rooted in fact. Fans of In Cold Blood or The Onion Field will find that Heaven Knows Who ranks among the greats.