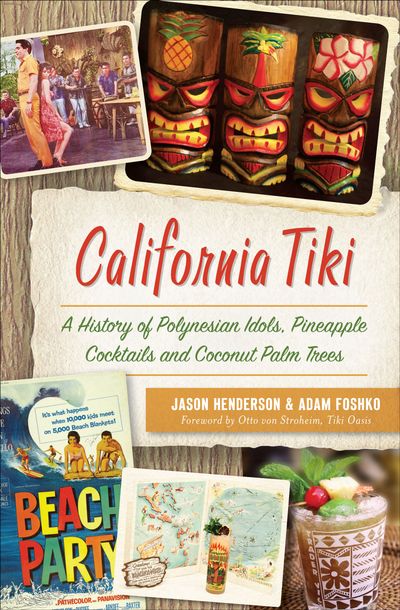 Published by Arcadia Publishing
The fascinating story behind California’s mid-twentieth century obsession with all things Polynesian and Hawaiian.

After World War II, suburbs proliferated around California cities as returning soldiers traded in their uniforms for business suits. After-hours leisure activities took on an island-themed sensuality that bloomed from a new fascination with Polynesia and Hawaii. Movies and television shows filmed in Malibu and Burbank urged viewers to escape everyday life with the likes of Elvis, Gidget, and Hawaiian Eye. Restaurants like Don the Beachcomber and Trader Vic’s sprang up to answer the demand for wild cocktails and even wilder décor.

A strange hodgepodge of idols, lush greenery and colorful drinks, Tiki beckoned men and women to lose themselves in exotic music and surf tunes. Take a trip back in time to the scene of Polynesian pop and three decades of palm trees, Mai Tais, and torches with this informal guide to the rise, fall, and resurgence of Tiki culture.