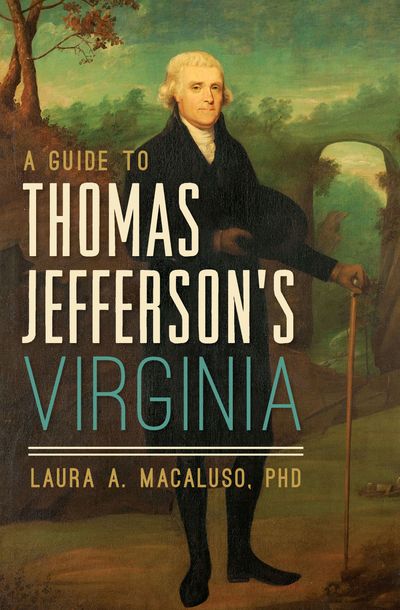 A Guide to Thomas Jefferson's Virginia

by Laura A. Macaluso

Published by Arcadia Publishing
Tour Thomas Jefferson’s Virginia, from Monticello to the Blue Ridge Mountains and beyond, with a guide that “mixes historical background with how-tos” (Daily Press).

Few prominent Americans are as associated with a place as Thomas Jefferson is with Virginia. The heart of “Jefferson Country” is his house and plantation at Monticello, but Jefferson traveled the breadth of his home state, from his time at the College of William and Mary in Williamsburg to the new state capital at Richmond and his retreat and plantation at Poplar Forest, near Lynchburg. While spending time in the beauty of the Blue Ridge Mountains, Jefferson was inspired to write his only book, Notes on the State of Virginia. Jefferson’s life story, and his many endeavors as a scholar and statesman, are illustrated in this guide to the state he held dear.

“This book mixes historical background with the how-tos of visiting the places Jefferson spent time, including the Wren Building at the College of William and Mary, which he attended, and the George Wythe house, where he studied law in Williamsburg.” —Daily Press