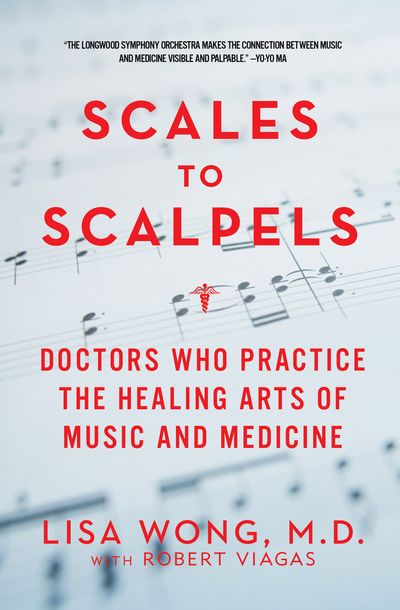 Published by Pegasus Books
The true story of an orchestra made up of medical professionals that “makes the connection between music and medicine visible and palpable” (Yo-Yo Ma). You may have read about the Longwood Symphony Orchestra (LSO) in the paper or heard them on your favorite radio station. But the LSO is not just any orchestra. It began in 1982 with a group of talented Boston-area physicians, med students and health-care professionals and has since flourished under the leadership of violinist Dr. Lisa Wong, who became president of the LSO in 1991. The orchestra is now a proud, extraordinary group of musicians with fans around the globe.
In Scales to Scalpels, Dr. Wong and Robert Viagas chronicle how the musical acumen of these physicians affects the way they administer healing and, in turn, how their work affects their music. What cognitive and emotional shifts occur when a surgeon transitions from the chaos of the ER to the discipline of the orchestra rehearsal studio? What’s it like to make a house call to a poor neighborhood in the morning and then play trumpet in a jazz group that night? Does music heal the doctors the way the doctors heal their patients? How does practicing the art of music transform the art of practicing medicine?